† We believe the Bible to be the inspired and only infallible written Word of God.† We believe that there is One God, eternally existent in three Persons; God the Father, God the Son, and God the Holy Spirit.

† We believe in the Blessed Hope, which is the rapture of the Church of God, which is in Christ at His return.

† We believe that the only means of being cleansed from sin, is through repentance, faith in the precious Blood of Jesus Christ and being baptized in water.

† We believe that regeneration by the Holy Ghost is absolutely essential for personal salvation.

† We believe that the redemptive work of Christ on the Cross provides healing for the human body in answer to believing in prayer.

† We believe that the baptism in the Holy Ghost, according to Acts 2:4, is given to believers who asks for it.

† We believe in the sanctifying power of the Holy Spirit, by whose indwelling, the Christian is enabled to live a Holy and separated life in this present world, Amen.

Our Core Values
Love- For God, our Church, our Families, our Community and the World.
Dedication-to undertake God’s work using our energies, innovations, and collective resources.
Integrity-through truthfulness, sincerity, and honesty in our thoughts, words and deeds.
Humility- and Grace in serving the Lord and His children.
Faithfulness-to read God’s word, study it, meditate on it, and obey it.

Mission Statement
To conduct a church for the worship of God according to the tenants set forth by the Church of God In Christ, Inc., to teach and preach the word of God, and to perform all such acts as are customarily engaged in by other Christian Religious bodies. We subscribe to the same creed, code of discipline and statement of faith as found in the official manual of the Church of God in Christ Articles of Religion section II. The ministries of Faith Temple shall not be limited to the United States in scope but shall be international.

Our Vision
A Church striving to be Spiritually Discerned, Scripturally Directed and Strategically Developed

1. Preach the Good News of Salvation that Christ is available to all
2. Provide meaningful and spiritually rewarding worship experiences and a program of discipleship through witness and outreach and education
3. Know and Share God’s Love
4. Build a congregation devoted to achieving God’s Vision for His people
5. Make a Difference in the lives of our members and in our community

In 1956 the late Mother Sadie Adams and her son, Eugene Adams approached the late Bishop Louis Henry Ford and requested that he send Bishop Moody (who at that time was Elder Moody) to Evanston, Illinois to establish a church.  Although he was very young (21 years old) and newly married, he accepted the call.  Bishop Moody’s willing heart and obedient spirit were the beginning of a great ministry for Evanston Illinois! 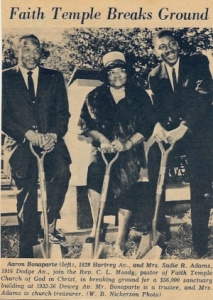 The church began to grow with services being held in different homes. The Adams family held our first services.  Later we moved to the home of Sister Marion Hudson. Lastly, Mother Clemmie Walker opened the doors of her home for us to worship.  On April 24, 1957 we had our official opening service at Foster School (2010 Dewey Avenue in Evanston, Illinois). From this small beginning God has caused the ministry to grow and prosper. 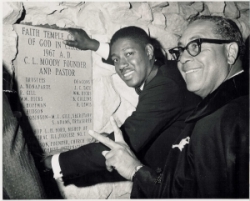 In July 1957, Bishop Moody and the saints had their first ‘open air tent revival’. They used the North Shore District Sunday School Department’s tent to hold the revival. In 1958 the first tent was inoperable. With the faith, diligence, and favor of God, Faith Temple’s small congregation was able to purchase another tent for $700.00 in order to continue to hold summer tent revival meetings.  After the tent meetings ended in 1958, the Lord enabled Faith Temple to move to the church building of Faith Tabernacle Fire Baptized Holiness Church. Pastor McCracklin and her congregation warmly received Faith Temple. 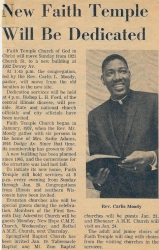 In 1960, the Lord blessed our Faith Temple family with a place of worship located at 1920 Church Street, at the rear of a barbershop. Faith Temple became known as the “church behind the barbershop”.  It was here behind the barbershop that we began to experience the mighty power of God. In 1961, the Lord spoke to Bishop and Mother Moody and promised them that He would bless the Faith Temple ministry if Bishop would leave his secular job and minister full time. Knowing that God’s not a man that He should lie, Bishop and Mother Moody, with no other source of income, left the secular job and gave God all they had.

In the summer of 1961, while preparing for the tent revival, the Lord audibly spoke to Bishop Moody and declared to him that for every seat he put under the tent, the Lord would fill it.  Bishop Moody had 300 chairs under that tent and God himself filled each and every one! For the next seven weeks, the Lord sent revival: blinded eyes were opened and the lame walked. The Lord performed many wonders. From this tent revival, fifty-three people came to know the Lord and joined the Faith Temple family.

In 1967 the Lord enabled Bishop Moody and the Faith Temple family to begin the construction of a new edifice at 1932 Dewey Avenue.  The building was completed in January of 1968. The ever-growing congregation walked in on January 14, 1968 and dedicated that building to the Lord. The years from 1968 to the present have been filled with growth and success.

In 1980 Bishop Moody was impressed of the Lord to embark upon a new challenge, a Christian Academy.  After he and his wife earnestly prayed, they partnered with Brother Jerry Williams to formulate a plan for establishing the first Protestant Christian Academy in the city of Evanston.  In September 1980 Faith Christian Academy was born!

The Faith Temple congregation was soon to witness another portion of the vision unfold. In 1984, Bishop Moody announced plans to construct an addition on Faith Temple Church to be used for Christian education.  And so, the work began.  One year later, it was finished and the school was able to expand.

As the congregation continued to grow and the needs of the Academy increased, the Lord again spoke to Bishop Moody and said “build”.  This time, he was to build a new structure. God provided over $2,000,000.00 to construct the current Faith Temple church building!  Under the leadership of Christ and through the obedience of His servants, Bishop Moody, Mother Moody and the entire Faith Temple Church family are experiencing a new move of God.  We are fully persuaded that “Jesus Christ is the same yesterday, and today, and forever”! (Hebrews 13:8)

Read about more Our Founder...